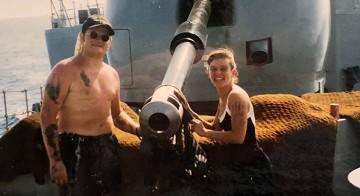 The sun was shining as I drove into Liverpool Marina to meet Simone Roche MBE, CEO of Northern Power Women, and for some reason the old saying ‘it’s grim up north’ sprung to mind, although this was not the case that day. In terms of employment, wealth and opportunity, the north of England has suffered when compared to the south. I wondered if it was her positive, sunny outlook and resolute attitude that was fundamental to Roche’s success.


Roche describes her childhood as no different to any other of her peers – loving parents and family days and although an only child she was part of a larger extend family with lots of cousins, family days out, something many of us will relate to. Although Roche describes herself as ‘not being the school’s greatest academic’ she had a love of maths and languages.

Although the school attended by Roche was quite disciplined this does not appear to have driven her to conform to the usual route of secondary education. Being intrepid she was looking for an adventure and settled on the Royal Navy.

“I was motivated by looking for an adventure. I was finished with the standard academia and I wasn’t inspired to go off and look at degrees. I was just ready to make my mark out there! I’d wanted to be a vet at 13 and an air hostess but at 5’ realised that wasn’t going to be happening! I thought I’d go and have a look at the Royal Navy and there was just something that made me feel as if I was at home. Maybe it was just that they were full of banter, warm and welcoming.”

You need to have experienced going through a recruitment and passing out process to fully understand the positive effect it can have. It builds a pride in the service in which you serve, an appreciation of the legacy that has gone before and your part in the continued future. This all changes you as a person and your outlook and your belief in your own ability. Then there is the excitement of a job that is different to the normal 9-5 commute and that offers the opportunity to see the world. From talking to Roche this clearly shaped her early career and brought her natural leadership qualities to the fore which were spotted by those in command.

“I felt like I fitted and that there was so much I could be involved with. I felt like I became me. It was a place that whether you wanted to play sport or whether you wanted to give your liver a battering, whatever it may be, then there were opportunities to experience. It was different learning and I absolutely relished it. I definitely felt that sense of belonging. I met some greatpeople, had some great postings and I think I learnt very early doors to take advantage of everything that was on offer. For me, making the decision at 17 was just the best thing I could have done.

My work ethic has always been pretty high and that 100% comes from the Royal Navy. You are always on call. Doing that at such an early age, you don’t know any different. You are also given quite a lot of responsibility at quite an early age. You have to learn fast, think quicker and take action. So, I think that everything I’ve done and achieved as I’ve gone along has been through the learning I took from there. I absolutely learnt to say ‘yes’ and work it out later. I don’t think I got into too much trouble from that but it definitely armed me in everything I’ve done. Even now, there are certain things that happen and you reflect back to what you were part of then.”


Read the full article and watch the video at www.kwib.co.uk